As I mention in another post I am incredibly curious about the moon and it affects our states of mind and emotions. I truly believe the moon has an incredible power on us living beings.

“Is commonly called the Hunter’s Moon, harkening back to European and Native American traditions where hunters would use the light of the full moon to track down their prey and stock up for the coming winter.

Contrary to popular belief, the Hunter’s Moon isn’t actually bigger or brighter than usual. It simply rises earlier, soon after sunset, which would give hunters plenty of bright moonlight to hunt by during the early evenings. To Neo Pagans, however, the Hunter’s Moon is known by a far more morbid name – the Blood Moon.

Humans through the ages have always found autumn’s full moons to be creepy, and not without good reason. There’s a reason why English folks in the Middle Ages called October’s full moon the Blood Moon, and it’s the exact same reason why even Halloween imagery today often features a large, low-hanging moon with an eerie reddish glow. The Hunter’s Moon rises early in the evening, which means that you are more likely to see it near the horizon.

When you observe the moon while it’s near the horizon, it gives off the illusion of being bigger while it’s in fact the same size. In addition, observing the moon at the horizon makes it look redder. This is because you’re seeing it through a thicker atmosphere, which scatters more blue light and lets more red light pass through to reach your eyes”.

Going back to the yoga approach of this topic, scientific explanations aside, the Hunter’s Moon or Blood Moon still holds an undeniable aura of mystique and power.

You must have heard about the Surya namaskar or Sun Salutation, but not many people know about the other side of it:

Chandra Namaskar or the Moon Salutation.

Is a sequence which reveres and honours the energy of the moon.

The name is derived from the Sanskrit, chandra, meaning “moon,” and “namaskara,” meaning “salutation.” Although they are less well known than the  practice, they complement it perfectly, as they embrace the opposite, interconnected energy.

While surya namaskar’s 12 postures, chandra namaskar has 14 positions correlating to the lunar phases. The moon salutation has the opposite effect on your body than the surya salutation; it is meant to calm your body, preparing you for a long and restful night’s sleep.

Chandra Namaskara is considered more yin in nature than the intrinsically yang Surya Namaskara. As such, Chandra Namaskar  is a more cooling, meditative sequence of postures, which is ideally to be practiced in the evening.

The sequence of asanas for Chandra Namaskara has many variations, but will often involve moving to the right and left, and facing the long edge of the mat.  Side stretches and circular movements of the sequence can be considered to represent the phases of the moon as it waxes and wanes. 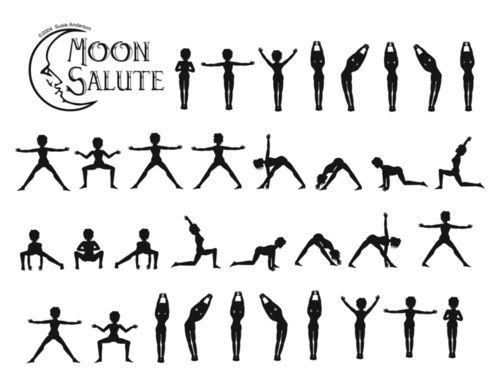 In practicing Chandra Namaskara, it is helpful to take the focus inward and to reflect on the meaning and significance of the moon and its energy for earth and oneself. . The practice can then be one of gratitude for the moon and all it offers.

Is recommended to have pen and paper close by so you can journal any thoughts or ideas that might present during your practice.

Practicing Chandra Namaskara is probably a relatively recent yogic practice, perhaps dating to the late 20th century, but practices of worshipping the moon are undoubtedly ancient. The moon was traditionally regarded in certain yogic texts as the source of immortality

From the Tarot perspective today Full Moon is in Taurus:

Time to release to make peace

I am not going to dive deep into it because I am a beginner in this aspect if you wan to know more about it there is tons of information online and books as well.

Hope the information helps, go and get your comfy clothes and start including this into your own practice, if you are not doing it already.

“One thing is for sure, a transformation is happening so surrender yourself to the flow of change that is taking you to the next level of growth for you. This Taurus Full Moon has us releasing excess emotions to make room for more peace”

Related posts brought to you by YARPP.